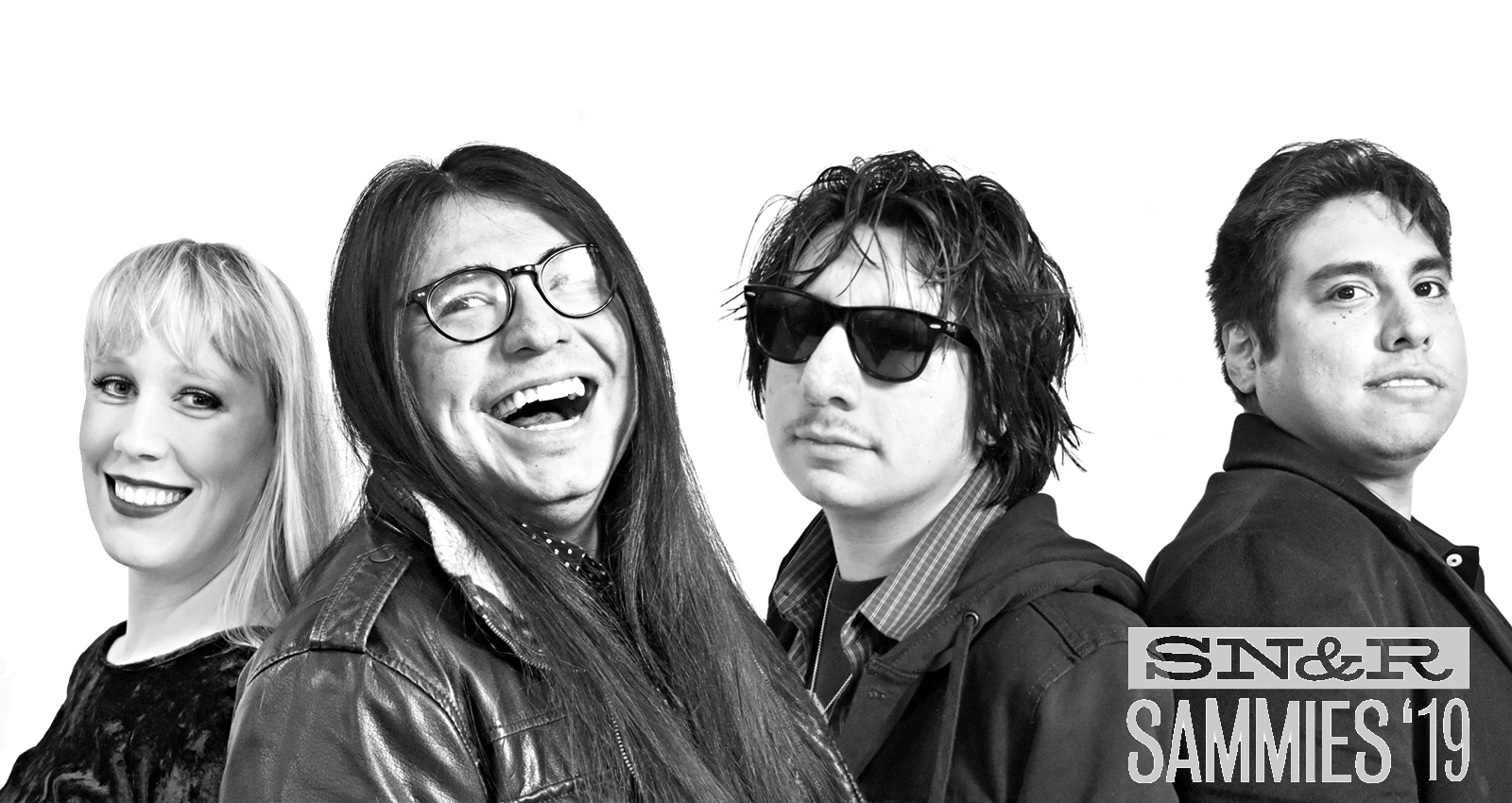 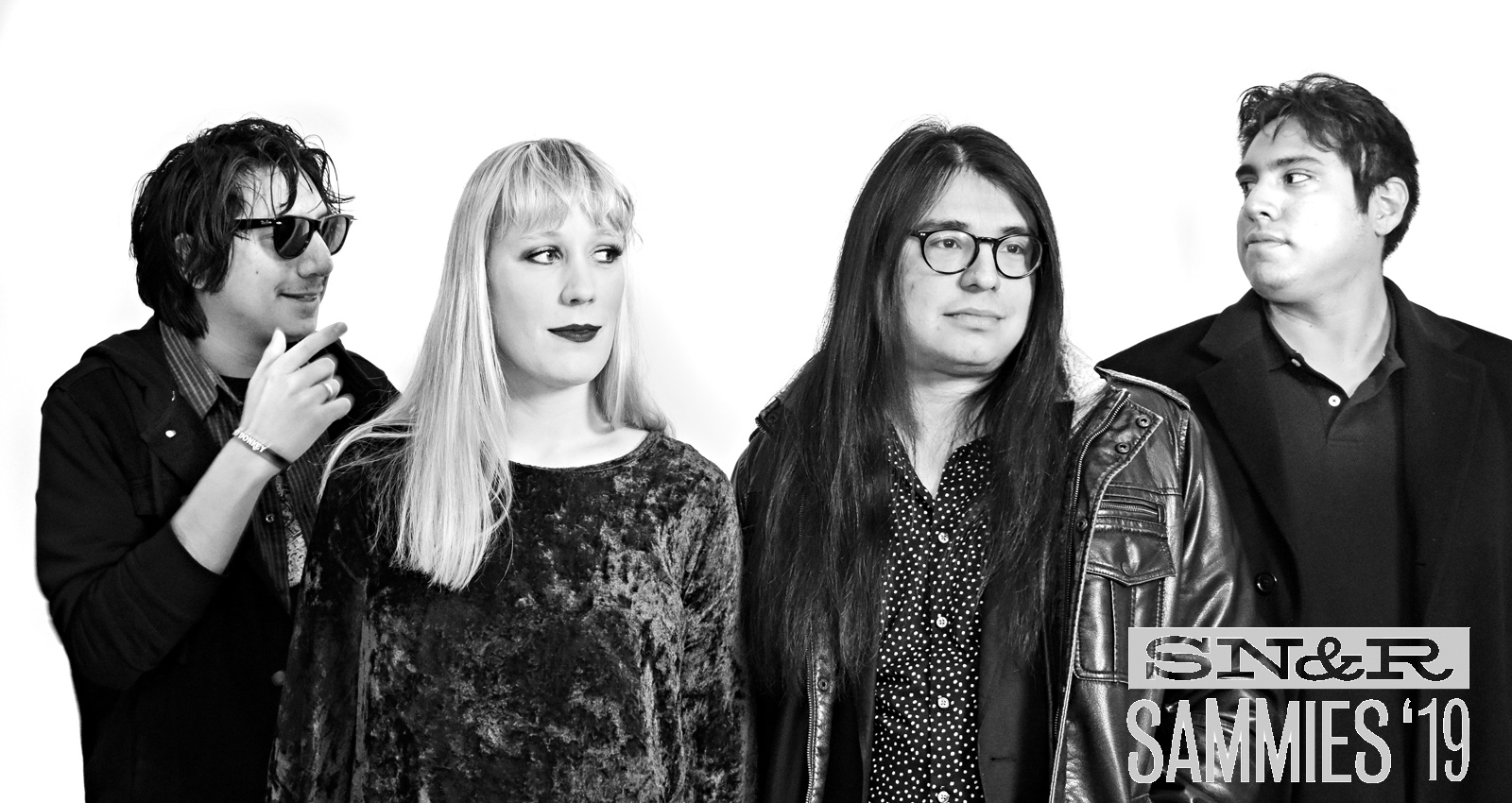 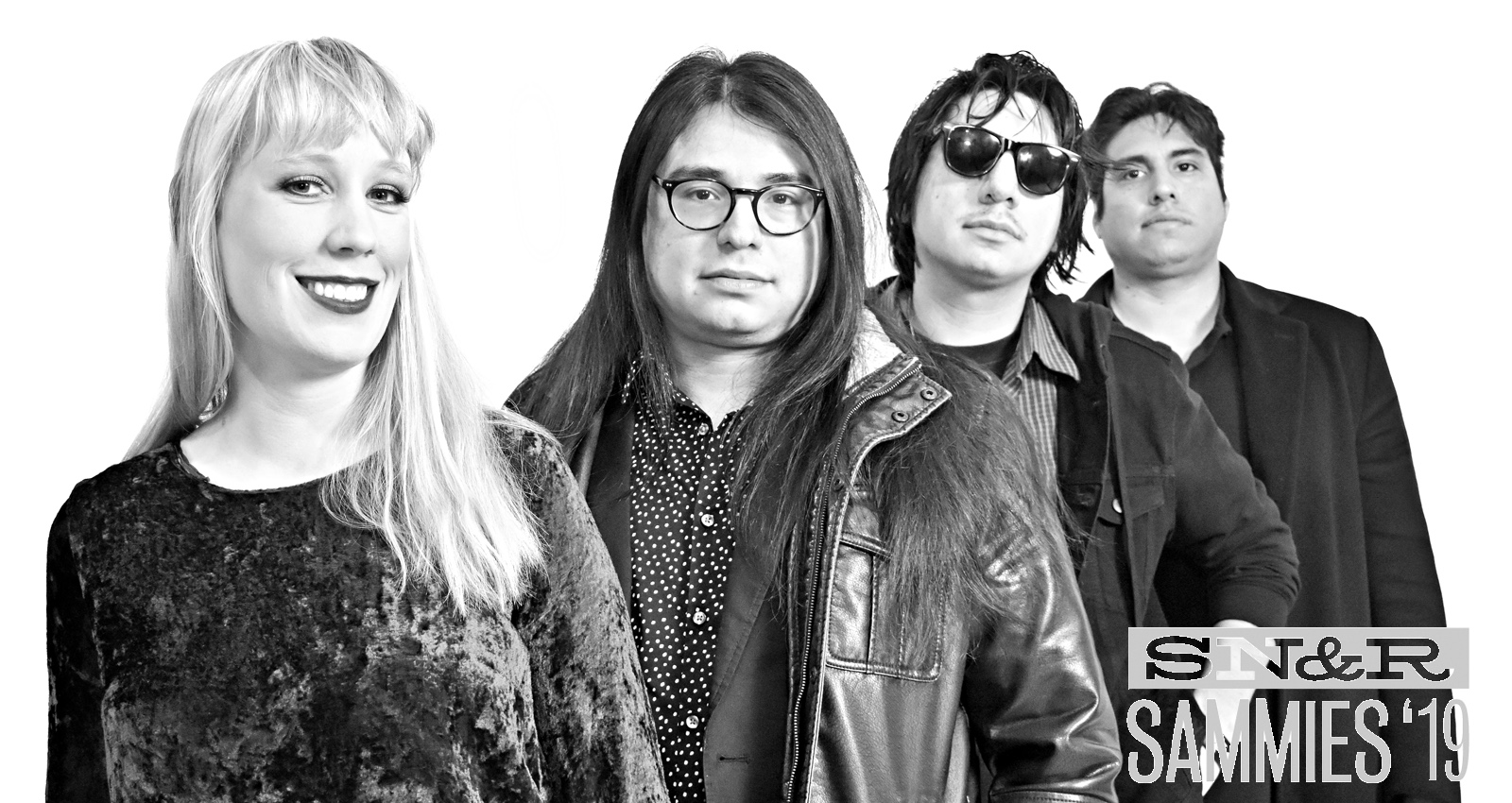 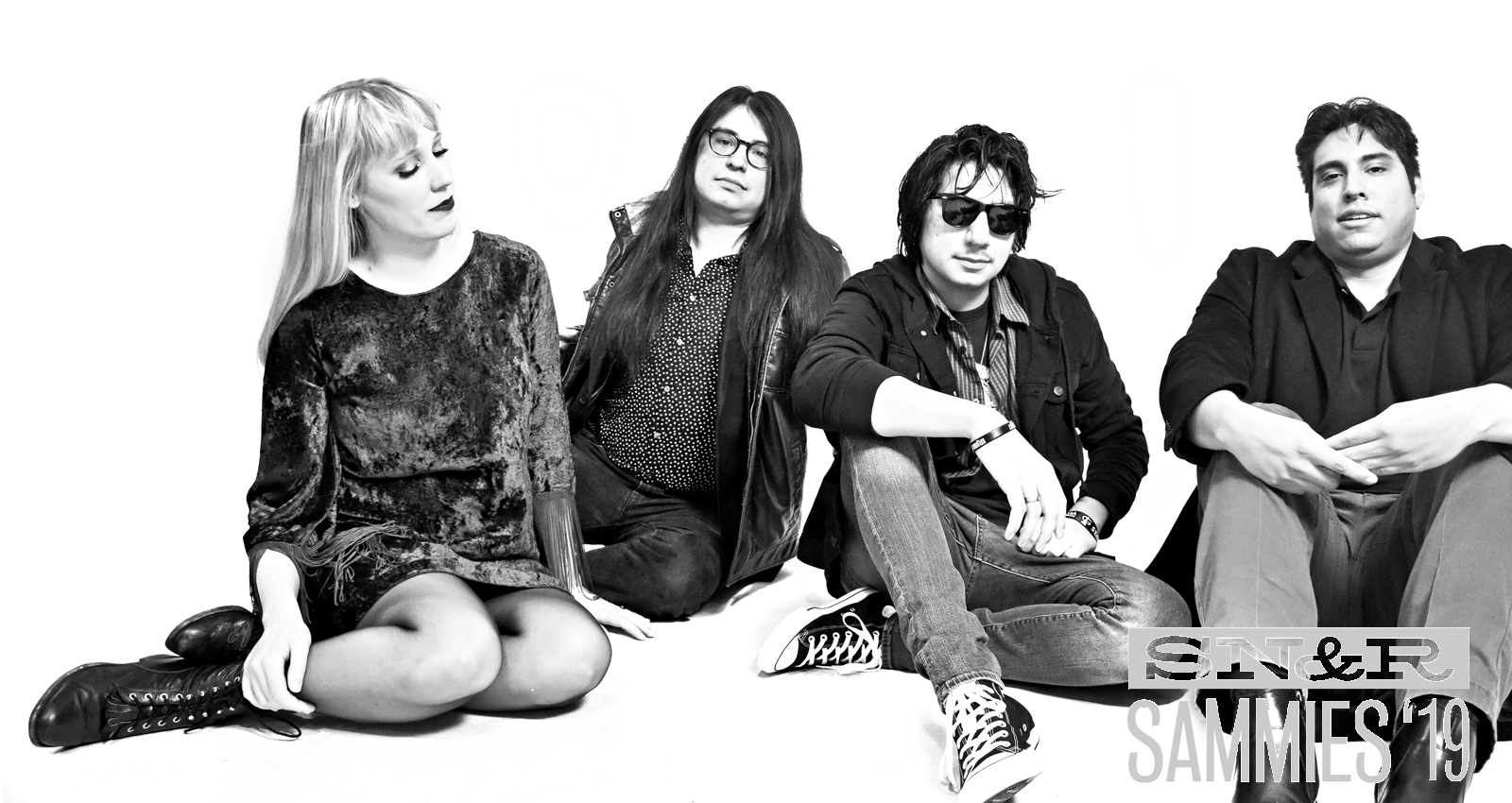 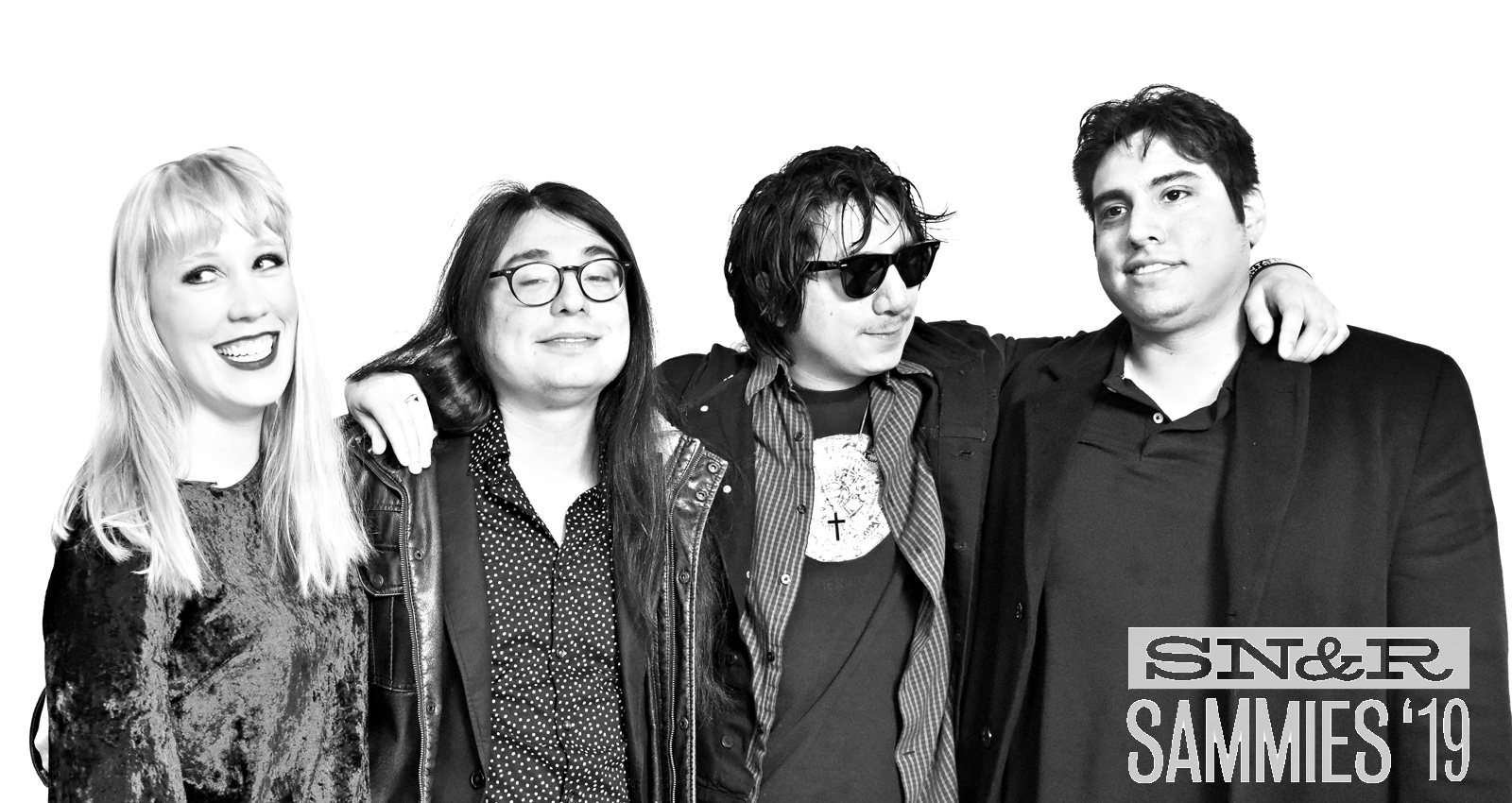 "Rock & Roll" by The Velvet Underground sums up a lot. The whole story of growing up in a kind of typical suburban household, but there’s something else out there, something dangerous but also accepting, and rock 'n' roll is the way that the larger outside world can speak to you.

The Velvet Underground talked about making music that could be fun but also have some intelligence to it, and we relate to that ambition.

We often pull each other in different directions though. Eddie can be a bit of a purist for blues, classic rock, jazz, and Americana classic country although he absolutely loves the avant garde side of popular music. Michael has a keen ear for hooks on the drums and he loves everything from Bill Withers, Booker T (Al Jackson Jr.) to Stephen Morris of Joy Division/New Order. Chad Smith of Red Hot Chili Peppers, Keith Moon of The Who, John Densmore of The Doors.

Rita is influenced vocally by Billie Holliday, Bessie Smith, The B 52s, Joan Baez and Emmylou Harris. And we hear in her keyboard playing the influence of Prince/Dr. Fink, Talking Heads, Carole King, etc.

Ray is a big fan of a lot of the experimental cutting edge music from the '70s and '80s that in many ways still hasn’t been eclipsed. He brings a lot of the Brian Eno, Phil Spector and Syd Barret asthetic. But he is also probably the biggest fan of what we would call “old-school” like Nile Rodgers and Chic. He’s big into Kraftwerk, which is the origin of a lot of the synthesizer based stuff that came after.

If your band was a movie, what movie would it be?

Blue Velvet. The story of a kind of familiar or typical world, but emphasizing the violence that is at once in plain sight, but also hidden by the context of a simpler world that many would rather blindly accept. Some of the same preoccupations with sexual dynamics and rock 'n' roll and human nature also appear in our lyrics.

Well, it just happened pretty naturally. Both Ed and Ray taught themselves on the same Squire guitar. Eventually, we wanted to play together at the same time and our parents bought us a Squire Bass. Michael joined in shortly after on drums. Ed and Rita started seeing each other and she would join in on jam sessions. Then, years later, we played some gigs. There’s really not much more than what we’ve already covered.

It’s never a good thing when not a lot of people show up. It’s also better when the people you are playing with share something in common with you in terms of aesthetic or sound or anything at all.

None! We refuse to be embarrassed. There’s no such thing as embarrassing pop music. We own our preferences like Cyndi Lauper owns her love of professional wrestling.

We are all big fans of Hall and Oates and I guess they have a rep for being kind of cliché '80s or yacht rock. We’re obsessed with Madonna.

Eddie loves Rod Stewart, but mostly Every Picture Tells a Story and Faces. Ron Wood’s playing is great on Faces' stuff too. Lester Bangs once wrote that there’s no such thing as a Ron Wood fan, but dammit, Eddie is one! Eddie is also a huge fan of John Mayer’s guitar tone. The man can play a strat!

"Lithium" by Nirvana or "Seven Nation Army" by The White Stripes at our parents' house as children. By the time Rita joined, we played "Search and Destroy" by Iggy & The Stooges, "Stubborn Kind of Fellow" by Marvin Gaye and "Man Who Sold the World", "The Width of a Circle" and "Moonage Daydream" by David Bowie, stuff like that.

Do some recording, get our stuff out there more, write more songs and see where it goes. We’re working with a well-known producer in town and our EP will be out soon, but there’s more in the chamber.

Well, we started the band when we were children playing music in an upstairs bedroom at our parents' house and getting the cops called on us. There's a long history of great bands that are brothers or family and use their family name for their band: The Isley Brothers, The Allman Brothers Band, The Brothers Johnson. Not everyone in those bands was a “brother,” but the brothers founded it, and it's just neat to have a band full of brothers. Then there are bands like the Beach Boys who are family/ brothers, but their band name is about something else that is relevant to their music. Then, there's other bands like Oasis who are brothers, but whose name doesn't have anything to do with anything.

We've always liked the simplicity and directness of a name that tells people who we are and what we're doing and that's about it. Three of us are brothers. We have a band. Our Name is Roa.

But to tell you the truth, we might change it to simply The Roa Band.

Eddie and Rita have been going to see Sea of Bees for like 10 years. We showed up for Jules enough that Jules knows us now (Hi Jules!!!). Jules is top of the heap as far as songwriters in Sacramento, bar none. There are a lot of Latinx artists that aren’t doing strictly Latin music that we’re really excited about in Sacramento, and it's nice to find a kinship in that, even if we don’t know them all that well personally yet.

The Velvet Underground, for sure. As far as we’re concerned they are the paragon for DIY/art rock and their progeny Talking Heads, The Stooges, Roxy Music, Patti Smith, Joy Division and New Order are all a big part of our sound. It goes without saying that The Velvets really opened up the kind of subject matter that you'd see in rock music into something more like film or literature, and we'd like to be part of that lineage.

People sometimes say we have some classic rock vibes. Deep Purple is really cool and Black Sabbath. Eddie and Rita listen to a lot of The Band and Derek and the Dominoes, both of which contribute to how we harmonize and how she uses keyboards. The Stones are great. Prince, Bob Dylan, Santana, Mott the Hoople, Leonard Cohen, Nick Cave, Scott Walker and Jimi Hendrix. Too many to name, really.

The Band has been a huge influence as far as songwriting. They’re singing about the Civil War and the divisions and hatred that still separate us as Americans, and a lot of the songs invite you to reflect on the dark past that wasn't that long ago or how history seems to repeat itself. But then again there’s this element of being quintessentially North American in a way that makes you feel there’s still a certain nobility to being a homesteader or living that whole Walden kind of existence, connected to this land and this country. And there's so much joy and celebration in the music, like when the harvest comes in, and then so many moments of solitude and contemplation up the face of a mountain or lost in some pines. On top of that, they create songs that convey their meaning through both musical expansion and sparsity that all reflects the subject matter. But what’s really most inspiring are contributions from each member of the band and the strength of the individual personalities even in the group context.

The Velvets are like that too, but whereas The Band is like a Great American Novel in album form with a narrative continuity to it, even if its like East of Eden across the generations epic, The Velvets are more like a collection of short stories with different narrators and about different things. And Lou Reed's spare immediate unsentimental language makes it feel either like a friend is confiding some real shit to you at a bar, or you're witnessing something on the street between two strangers, but either way it feels matter of fact and fast like a subway hit you. Then Nico singing creates an entirely different mood than when Lou Reed or John Cale or Doug Yule or Moe Tucker is singing. One thing we relate to, in both instances, The Band and The Velvet Underground, is having different singers to play different roles as they deliver different songs.

Devo is another favorite, and the struggle to see that evil is basically a part of human nature and deeply embedded in American life. A lot of people only really know them for 'whip it' and the funny hats, but now its obvious that they were extremely prophetic about how far things would devolve so to speak, and how sinister and dangerous technology and advertising would become.

Another of our biggest influences is David Bowie. We do hard rock stuff but we also do stuff with a dance flavor to it. People remark that we sound very '70s and '80s, and he’s who we most associate a lot of those sounds with. People have also compared us to everything from the B52s, Elvis Costello and the Attractions, INXS, Jellyfish, Dire Straits, Steve Miller Band, Jack White, the Commodores; really all over the map. We don’t necessarily relate strongly to each of those artists, but we certainly appreciate the comparisons.

For the guys, our parents were big music fans although neither of them were musicians. Nobody we knew personally really played music. We taught ourselves to play by ear and by using some guitar tabs off the internet. I guess you could say our parents inspired us because they bought us our first instruments and allowed us to make as much noise as we wanted.

Rita comes from a very musical family on both sides. Her dad and his siblings have big campfire sing -longs with guitars and such. On her mom’s side, her uncle and her cousins are professional musicians, even her grandma’s funeral turned into a jam session, which was really nice.

Often, people are afraid to put themselves out there enough to reach the heights of those they admire. Well, these days, we’re all about “fuck that shit.” You want a concise little phrase about who we are? Take it from a working title of one of our songs."Take it to the Max."