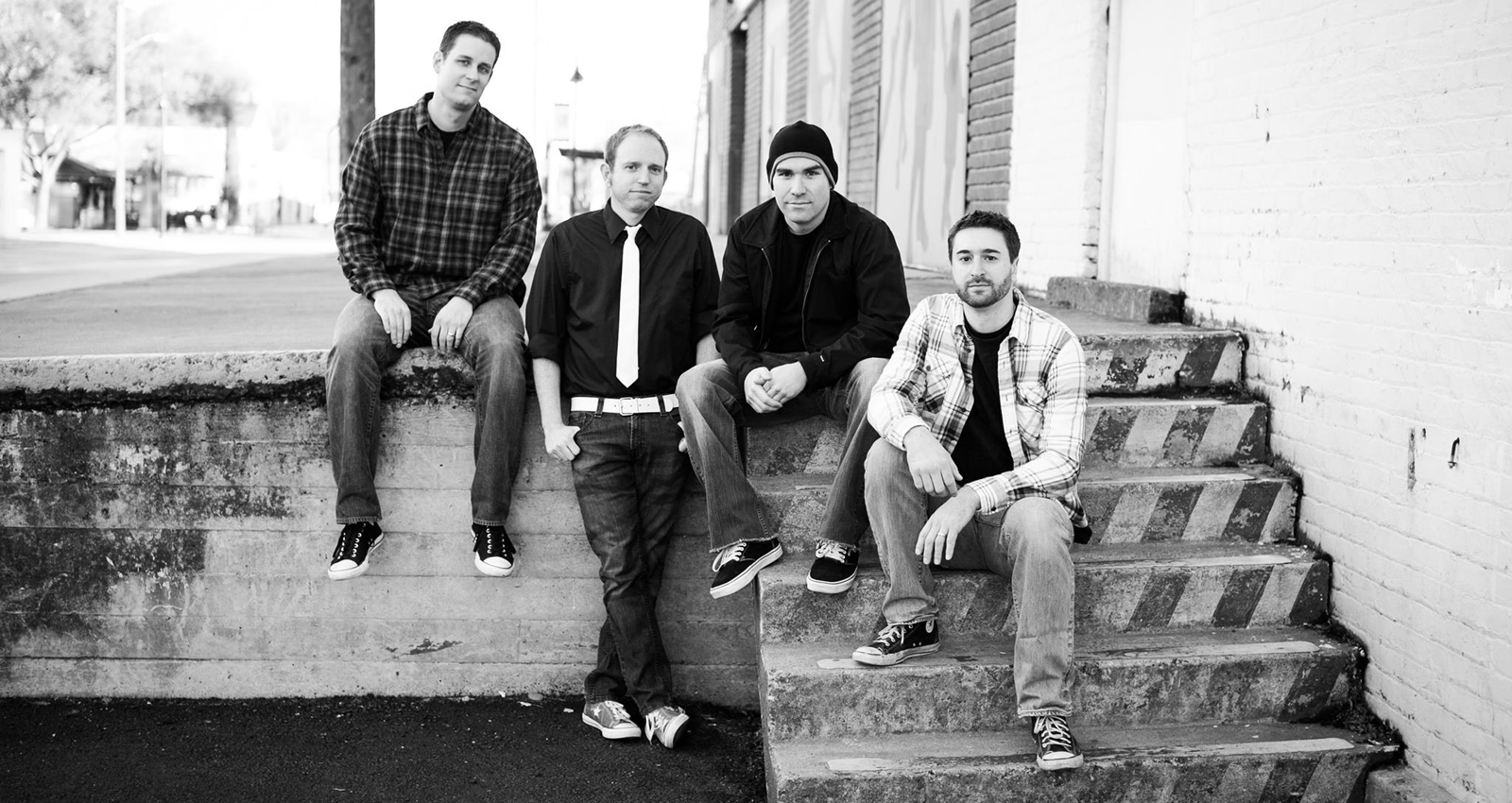 Jeff: I can’t name one, and even if I did, it would be different every week. Tony: This question is impossible to answer. David: As far as a song that always puts me in a good mood when I hear it and never skip it, I'd have to say "Rock With You" by Michael Jackson. Nathan: "Kashmir" and "Bohemian Rhapsody" are two of my all-time faves.

David: As close to the album as we can get it, completely performed live by a four-piece with never any backing tracks.
Nathan: A lot of fun!

Tony: Jeff and Nate were in a band called Automatic Rival, that I opened for a number of times. When A.R. ended, they asked if I was interested in jamming. Then Jeff and David had a mutual friend that introduced them, and he joined. Almost seven years later, the original lineup is in tact, and we are a strong band in part because of that.

David: I thought I was done playing in bands when Jeff asked me to come check out a practice. Ha!

Jeff: In Sac, I would probably have to say playing at the Crest Theatre as part of the Everclear tour in 2015.

Tony: Agreed on the Crest with Everclear.

Jake: Two come to mind. Neither venue will be named, but both were early on in the band’s existence, and the crowds were thin. That’s putting it nicely.

Tony: I know exactly which two you are talking about.

David: One other show was the time we were headed out to the Bay Area, and both front tires on our van blew out at separate times, and by then all the tire places were closed. We burned through band funds to get a hotel room, food and then replacement tires in the morning (in addition to missing the show!). Something like that can end a band, but we made it through it.

Tony: When I worked at Tower Records in 2000-2001, I was more of a music snob. Now, I'm not embarrassed to like any song I like. If it moves you, in whatever way, there is no need to be embarrassed. We play a couple cheesy songs, like "All Star" by Smash Mouth or "She's So High" by Tal Bachman, but if the crowd gets into them, they can be a lot of fun to play.

David: A lot of my iTunes library is songs that begin "The Original Broadway Cast of..."

Nathan: I get teased for liking Creed, but I think it's just because Scott Stapp is kind of a douche.

Jeff: I think it was an oldie. Maybe “All I Have To Do Is Dream” by The Everly Brothers, or “My Girl” by The Temptations.

Tony: On guitar, I believe it was "Come As You Are" by Nirvana.

David: I taught myself guitar by going through the entire Beatles catalog in middle school.

Nathan: Probably either "Black Magic Woman" by Santana or "Aqualung" by Jethro Tull.

Tony: Anybody know the booker at Harlow's?

David: We've done tribute nights in the past (Foo Fighters, Third Eye Blind, we even played the Weezer Blue Album in its entirety)—since we have a whole decade from which to choose, we could very easily do more (Green Day/Blink 182/Nirvana/Pearl Jam, etc.) in the future if people would like that.

Nathan: Continuing to expand our song catalog and fan base.

Jeff: I believe (someone, correct me if I’m wrong) we were just trying to think of names that sounded '90s-ish. I couldn’t even tell you some of the ones that didn’t make the cut.

David: A '90s movie about remembering things seems like a perfect cover band name for some '90s music nostalgia.

Jeff: Not surprising, but many of the drummers from the '90s: both of the Daves from Pearl Jam, Matt Cameron (Soundgarden), Jimmy Chamberlain (Smashing Pumpkins).

David: As far as my personal style of playing guitar goes, it's probably some amalgam of David Gilmour, George Harrison, Slash, Johnny Greenwood and Billy Corgan.

Nathan: P-Nut (311), Tony Kanal (No Doubt), and Flea (Red Hot Chili Peppers) are a few of my biggest musical influences.

Tony: The Beatles and Nirvana inspired me to learn guitar and bass in middle school, but my mother and grandfather originally inspired me to take piano lessons at a young age.

David: My dad plays guitar, and watching him as a little kid made me want to do it, too.

Nathan: Like David, my dad also plays guitar. My first experience playing music was on my church's worship team with my parents.

David: The irony is not lost on me that I play in a cover band, performing other peoples' music, and one of my favorite quotes by Ralph Waldo Emerson in Self Reliance is: "Imitation is suicide."

Nathan: "Be excellent to each other."—Bill and Ted