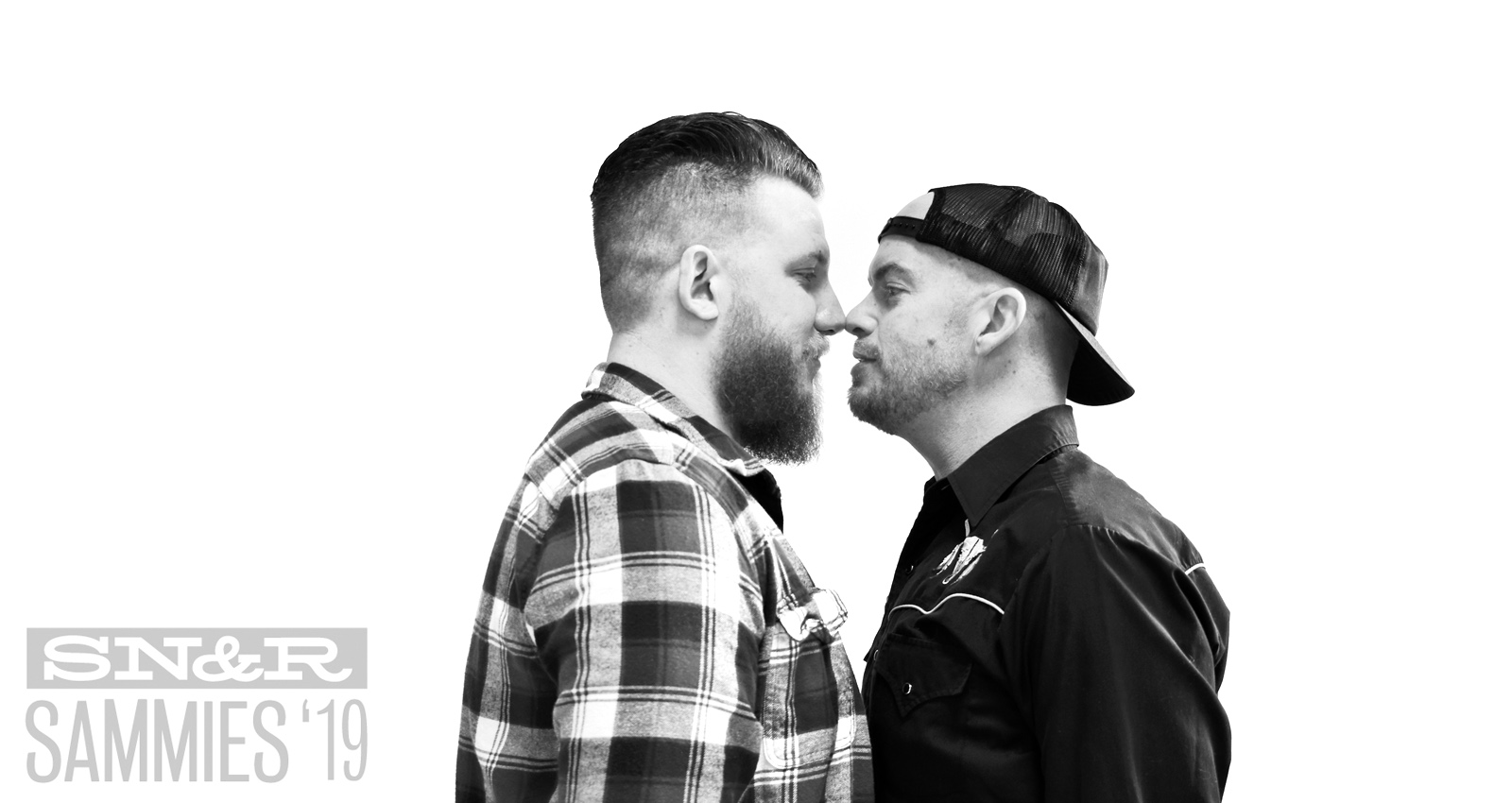 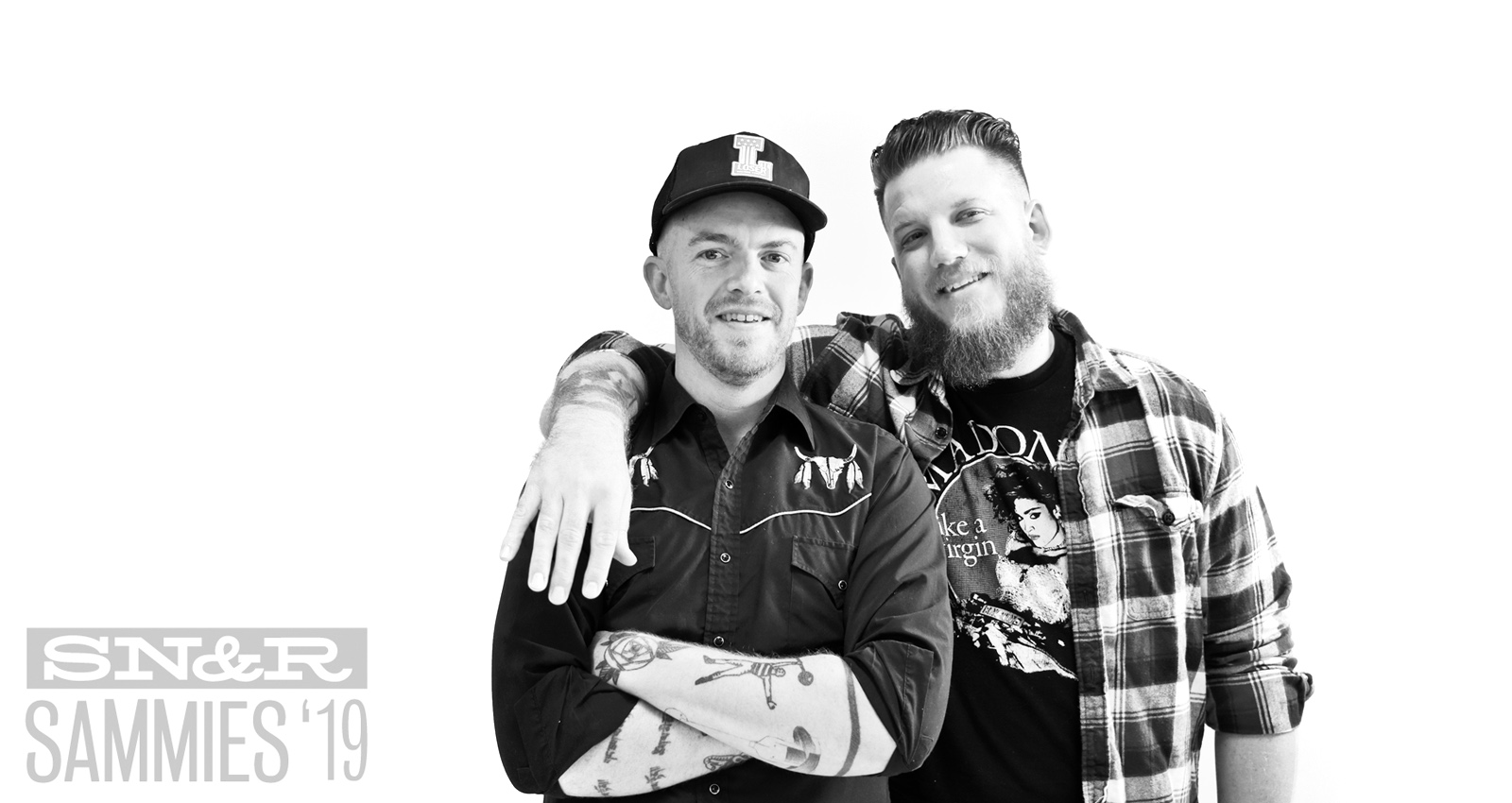 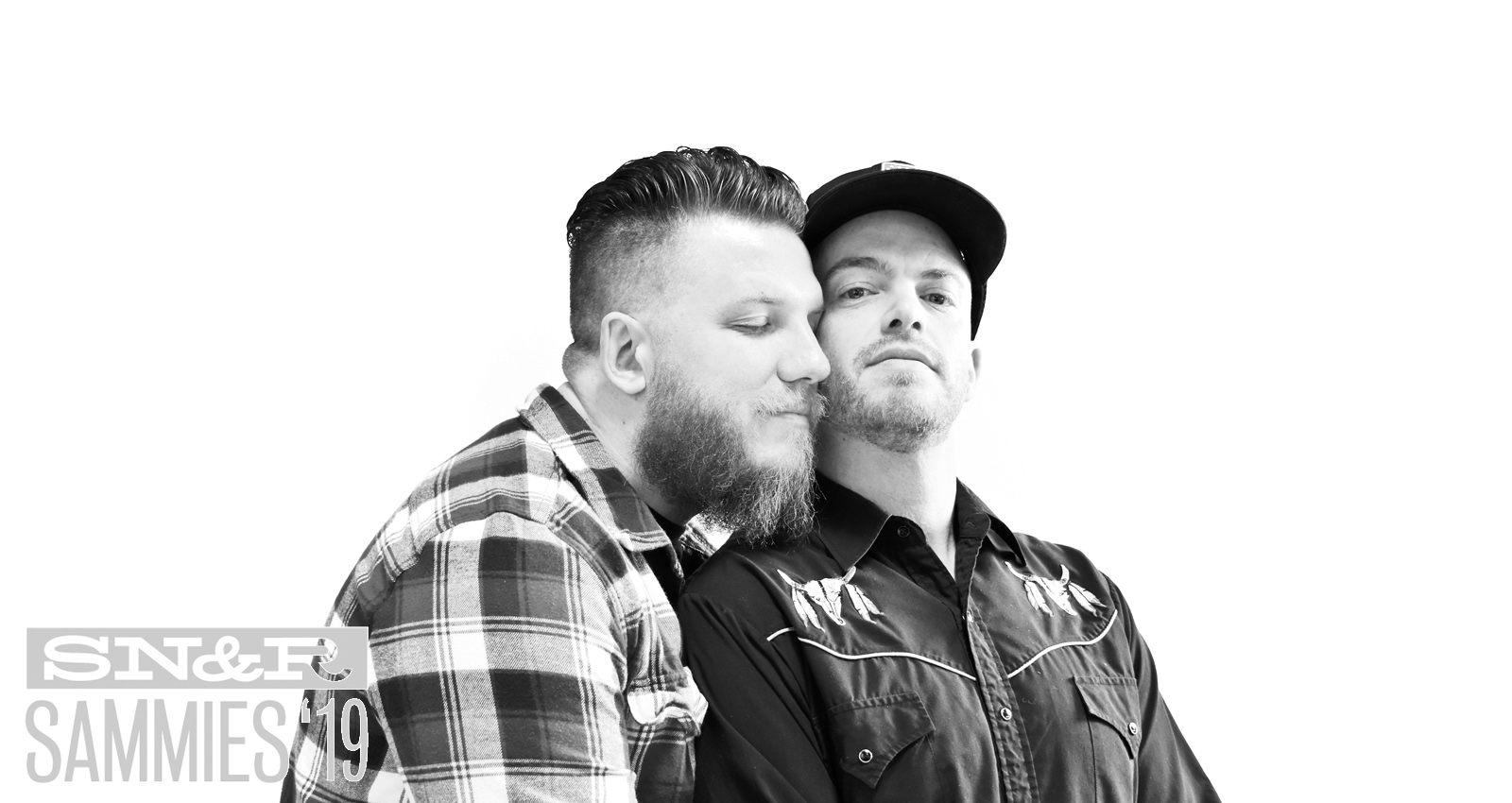 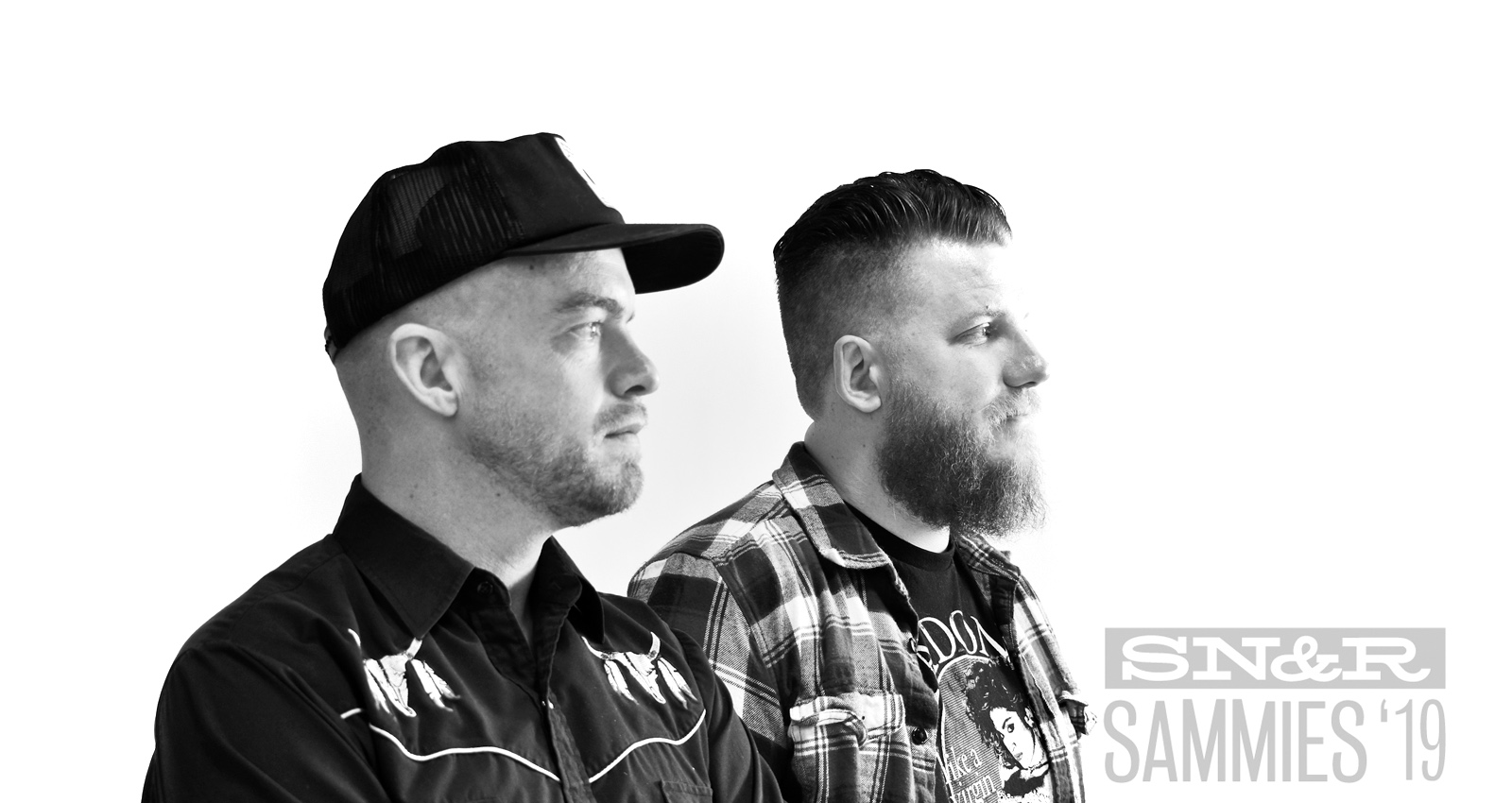 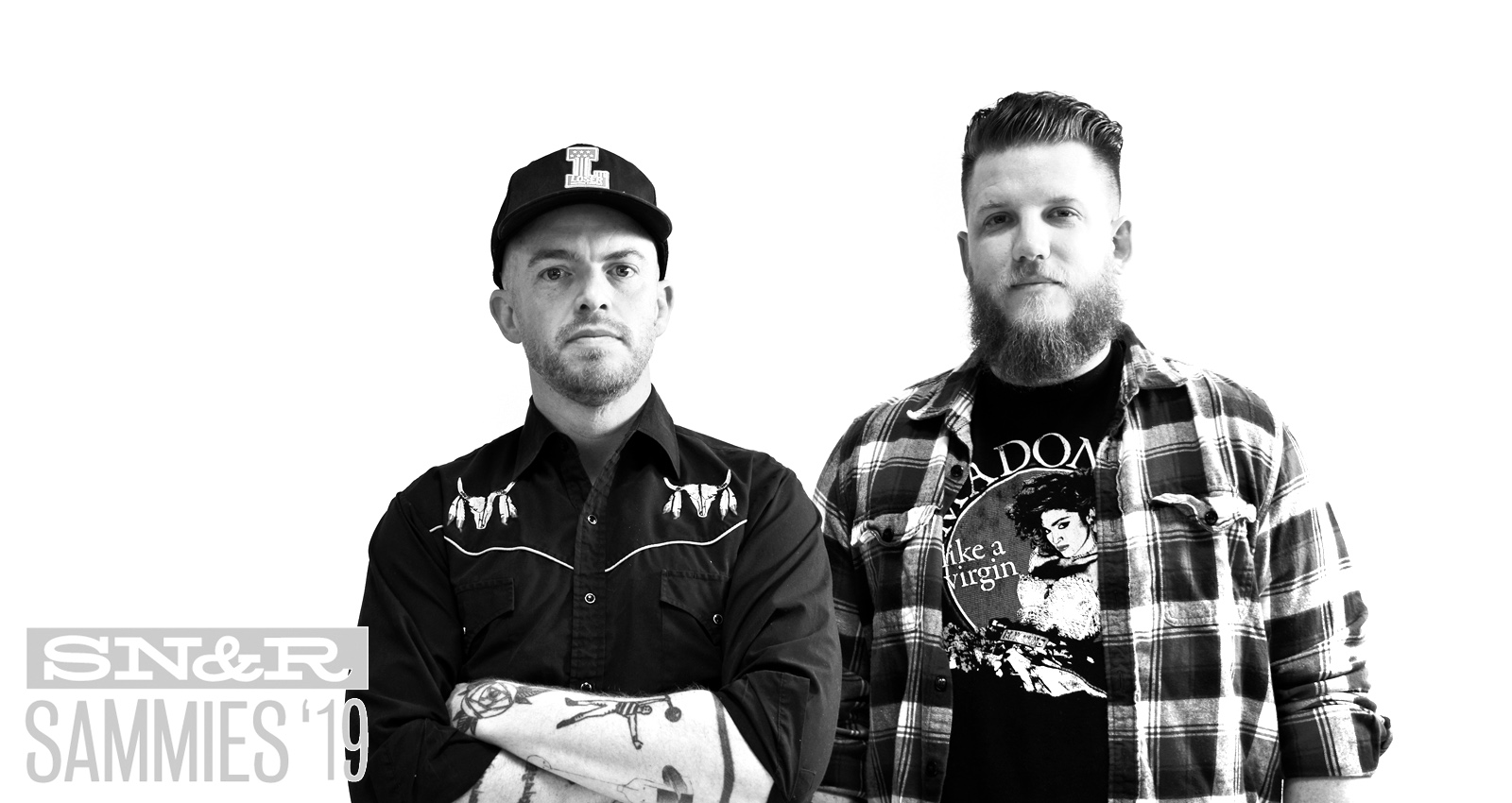 Cities You Wish You Were From

Tyler: (This is tough) I'd have to say "Holocene" by Bon Iver.

We're asked a lot about our sound—how we are a two piece that sounds like a five-piece. So how do we get our sound? It's not really a secret, and Eli loves to talk about it. Ask him at any show, and he'll gladly oblige. For sake of brevity, it has to do a lot with his neck pickup in his Jag called "A Little Thunder." Check them out!

Rock music you can dance to.

We had worked together prior to Cities. Tyler played guitar in Eli and the Sound Cult for a short time, and we had a few recording projects we did after that. Eli had written some new material that he was inspired to pursue, and started looking for drummers. He didn't have much luck, and remembered that Tyler played drums. Eli sent Tyler some of the tracks, and Tyler liked them immediately. Eli continued to try drummers out, and Tyler started lobbying for the drummer job. Eli ignored this for some time, but Tyler is persistent. We got together one day, and it worked. Kismet? Sure.

You know, we've really had great shows in our hometown. It's a privilege to be a part of this community, and there's so much talent around to stack a bill with. So, it's hard to say which has been the best. We loved playing First Fest in 2018; playing that stage was something we won't soon forget. If we're being honest, I think our favorite show that we've played was at Goldfield Trading Post with Hot Water Music and Kevin Seconds. Such a memorable night—The crowd was great, the other bands were so gracious, and the sound in that room (and our sound guy Ira!) were exceptional.

We started working with a promoter in SoCal that booked us a few gigs last year, one being in Ventura at a spot called The Sewer (that's not the real name, but that's what the locals call it). We show up, and see that directly across the street is a larger venue—Testament is playing. Obviously we're not a metal band, but we knew who was going to draw the crowd that night. We load our gear in, and are told to store it in the downstairs bathroom, directly past the "stage." That's right, the bathroom. The stage was a small alcove, about 10-12 feet across, and maybe 6 inches deep (really, it wasn't a stage at all). In any case, after the first band played, we set up our gear. Eli plugs his rig in, starts to tune, and the entire place loses power. Pitch. Friggin'. Black. So everyone pulls out their lighters, and the bartender rushes to the breaker box and had it figured out pretty quickly. About a minute after the power turned on, a particularly intoxicated patron bumped into one of the speaker stands and it fell on Tyler's drum kit and grazed his head. Luckily, it didn't hit him square in the dome, or this would be a story about his hospital visit. At this point, we were about ready to say, "You know what? We tried, but obviously the universe doesn't want us to play tonight." But no. We don't give up. Ever. We ended up playing to a packed room, which was awesome. Lucky for us, Testament was on later than we were, so many of their fans came over to give us a listen. In reality, this was only the worst show because of the series of unfortunate events that led up to us actually playing and having a great time.

I think the standard answer is Justin Timberlake—and really only because he's pop and you're not supposed to love pop when you're in a rock band. But his talent is undeniable, and who doesn't love to listen to a good J.T. song? Everyone does. That's why he's so popular. So when we pull up to a venue pumping his stuff, don't be surprised.

Tyler: I think the first song I learned on drums was "Smells Like Teen Spirit." I felt like I could literally do anything after I mastered that opening drum-part.

Eli: When I had someone show me how to play a power chord, it was all over. I think I started writing my own music that same day.

We have a lot to look forward to, and it's been quite a ride already. We're looking forward to getting back up to the Pacific Northwest, and hopefully getting to Boise this year. We really love touring—It's not always easy, but we seem to find a way to make it happen (and that's mostly because we have loving and supportive families!) We're also hoping to play some bigger shows in Sac. We're excited to work with Benny C/Trace Paper Productions for some new music we're going to put out this year... 2019 should be a good one!

Naming a band is, well, arduous. We had many ideas; we rejected all of them. Then, at one particular rehearsal, we were playing a song called "Cities You Wish You Were From," and Eli said, "Hey—that should be our band's name." We mulled it over, and it stuck. We find that a majority of people shorten it to "Cities," and we're fine with that.

We were both raised in the Baptist church, and although both of us have no religious affiliation any longer, we have to say the music started something within each of us. We both had parents that were music lovers, and music was present in our lives from the start. Eli started playing music when he caught the bug in high school and started a punk band. Bands like Black Flag, Pennywise and The Germs were a major inspiration for his original projects. Tyler was pretty pre-occupied with baseball in high school and early college, but playing music was always something he needed to do. He moved to Sacramento from Southern California in 2007 and quickly started a band called Behind the Satellites, playing guitar. His main inspirations are the Foo Fighters, Manchester Orchestra and Jimmy Eat World.

Hug the people you love.